Good morning everyone!
It is Friday again, and as promised earlier this week: I have something to show you... And it is not a bunch of Ollies!
I finished Hugo the Hippo! 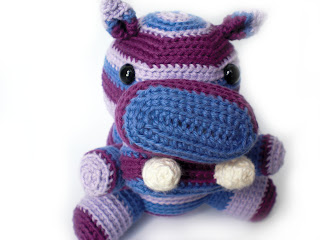 Hugo is a pattern from Stacey Trock (do I ever make something else? Well, yeah... Sometimes)
And it is a cutie! He is a free pattern by the way! So if I have inspired you to try out Stacey Trock's patterns Hugo is a great one to start with!

I have also spent some time making some pictures of a very stripy family! 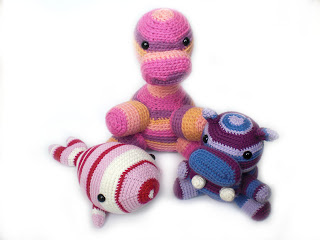 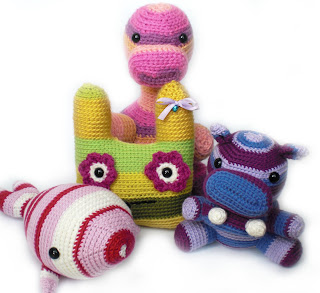 In the picture we see Hugo, with his friends Cliff the Dinosaur, Richard the Whale and Mixtro the Monster.
Cliff is made with Bravo Mezzo Color, his stripes come from the yarn. Hugo and Richard both have stripes created with the Stripe generator.
Mixtro is made with a Magic Ball, which is a ball of yarn made out of scraps of yarn.
I just thought they were adorable all together! :)

Alright, I have to admit... This FOF is not Ollie free.

Because I have designed a keychain! 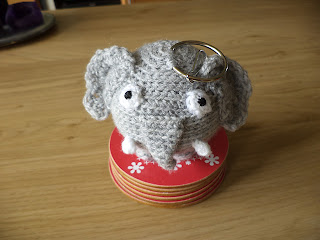 Of Ollie! Actually this also comes from my order of five Ollies at work. My superior though Ollie was a lot of fun, and he was very interested in the making off a Ollie.
What he really wanted was 2000 of them, to throw upon the soccer field at the coming match, but I thought that was not such a good idea... So I made him a keychain. And somehow I doubt this little Ollie will make it's way onto the field... :P

And that was it for today.
Monday I will skip a week of posting, I have more than enough studying to do (even though they call it a holiday). I hope to see you all again on WIPW!

And for now, go to Tami's Amis for more!

Natasja de Jong
Hi, I'm Natasja. Crochet lover and cat addict. When I am not crocheting or cuddling with my cat, I follow Religious Studies at the University of Leiden. I have too many hobbies beside crocheting, that I all try to squeeze in next to trying to get my degree in a timely manner ;)